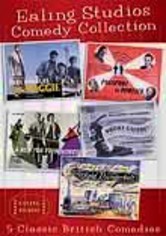 1950 NR 1h 23m DVD
Two Welsh coalminers go on a wild day trip to London in this remastered Ealing Studios comedy classic. After winning a contest, Jones brothers David (Donald Houston) and Thomas (Meredith Edwards) head to London to collect their cash prize. A refined journalist (Alec Guinness) is supposed to meet and escort the men but ends up chasing after them as they lurch into one hilarious big-city adventure after another. Hugh Griffith costars.