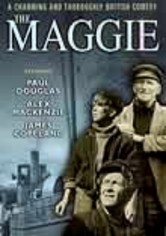 1954 NR 1h 32m DVD
A wily sea captain hoodwinks a rich Yank in this remastered Ealing Studios comedy. In danger of losing his shipping license, Mactaggart (Alex Mackenzie) convinces tycoon Calvin B. Marshall (Paul Douglas) that he's just the skipper to get Marshall's effects to a remote island. But Marshall rues his decision when he sees &NFiThe Maggie&NFi_; -- Mactaggart's floating bucket of bolts. Hilarity ensues as Marshall tries to save his things from a watery grave.