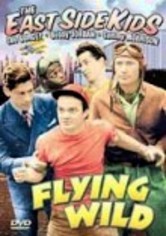 1941 NR 1h 4m DVD
The popular comedy troupe returns for more adventures as a ragtag crew of good-natured street kids trying to make it in World War II-era New York City. In this installment, the gang goes to work in an airfield and encounters enemy spies. Leader Muggs (Leo Gorcey) learns of a doctor's plot to smuggle military documents using a flying ambulance, and it's up to the kids to collect enough evidence to prove that the doctor is a spy.