The East Side Kids: Pride of the Bowery 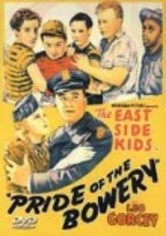 The East Side Kids: Pride of the Bowery

1941 NR 1h 1m DVD
In this early East Side Kids feature, boxer Muggs (Leo Gorcey) is preparing for a fight, and manager Danny (Bobby Jordan) sends him upstate to a training camp, which turns out to be a military-style Civilian Conservation Corps. The hard labor gets Muggs in good shape, but when a fellow worker named Willie (Bobby Stone) double-crosses him, will Danny be able to bail him out? Donald Haines and David Gorcey round out the gang.