The Einstein of Sex 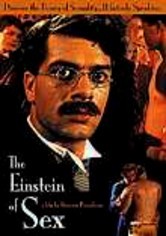 The Einstein of Sex

2000 NR 1h 40m DVD
Long before the Stonewall Riots, Masters and Johnson or even the Kinsey Report, there was Dr. Magnus Hirschfeld, a gay German Jew living in 19th century Berlin. Now, Rosa von Praunheim, the firebrand of German cinema, presents a compelling account of the doctor who founded the first gay political group in 1897 and established the first medical practice for gays, the renowned Institute on Sexual Science, which thrived until Nazi oppression.