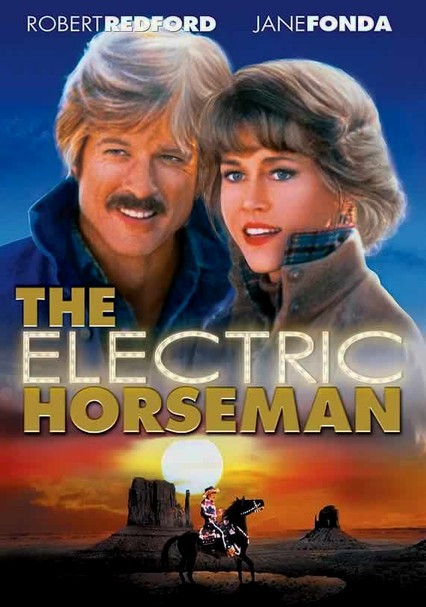 1979 PG 2h 0m DVD
An alcoholic former rodeo champion who's been shilling for a breakfast cereal company steals a valuable but mistreated horse during an advertising stunt at a Las Vegas hotel. Intrigued by the story, a TV news reporter is on the case.

Parents need to know that early in The Electric Horseman the leading character is a self-destructive alcoholic who slurs his words, falls, and barely functions, though he eventually cleans up. The other leading character has insomnia and uses sleeping pills. There is one exaggerated police chase with cars and motorcycles crashing, flying through the air, even exploding, but no injuries. Romantic scenes are limited to warm kissing and embracing and an assumption that the two lovers have had sex off-camera.

Romantic kisses and embraces as two characters fall in love. An assumption can be made that the two have had sex off camera. Some skimpy and low-cut clothing in scenes set in Las Vegas.

Sole action sequence is a lengthy chase in which police on motorcycles and in sedans try to capture a man on horseback. The vehicles are upended, crash, run off the road; no one is hurt. The hero surprises a stalking woman and pushes her to the ground; she slaps him.

This film stresses the value of a single individual standing up for what he or she believes in. It also illustrates that people can redeem themselves by performing good deeds and being unselfish.

At the film's opening, Sonny Steele is a reckless alcoholic: falling, slurring his words, misbehaving, always drunk. Early scenes take place in Las Vegas and there's much on-camera alcohol consumption, as well as smoking. The leading female character uses sleeping pills. In addition, a central part of the story concerns a horse who has been mistreated with heavy steroid and tranquilizer use.