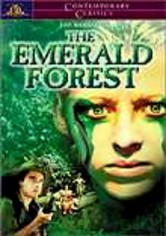 1985 R 1h 54m DVD
An American engineer, Bill Markham (Powers Boothe), searches for his son, Tommy (William Rodriguez), who's been kidnapped by Indians in an Amazonian rain forest. But when he tracks him down, it's quickly apparent that the boy has become part of another world. This world causes Bill to question his own in director John Boorman's action-adventure, which explores the differences and the tension between primitive and developed societies.