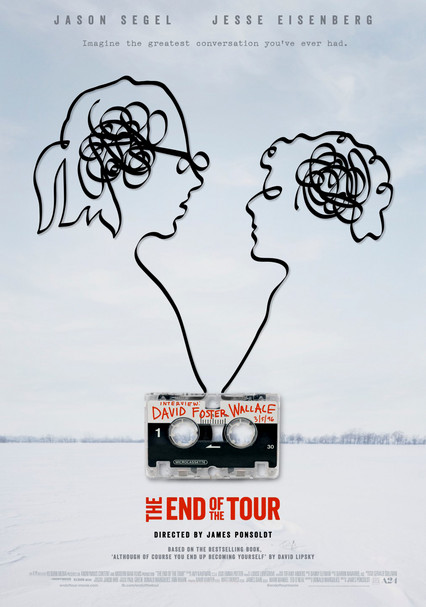 2015 R 1h 46m Blu-ray / DVD
In 1996, "Rolling Stone" reporter David Lipsky accompanied acclaimed author David Foster Wallace on a five-day promotional tour, which is chronicled in this affecting drama that focuses on the bond they form through casual and profound discussions.

Parents need to know that The End of the Tour is a superb, mature drama based on a 1996 interview between reporter David Lipsky (Jesse Eisenberg) and author David Foster Wallace (Jason Segel). There's a reference to suicide and some very strong language ("f--k," "s--t," etc.), plus several sexual references (to masturbation, anonymous sex, oral sex, etc.), though no actual sex is shown. Characters smoke a lot of cigarettes and drink socially; cocaine, heroin, and other drugs are also referenced but not shown. Though the movie is talky, it's also intelligent, subtle, and profound, touching on topics like celebrity, journalism, writing, friendship, and loyalty (as wel as, briefly, issues like addiction and suicide). Teens interested in pursuing writing as a career will find plenty to think about here.

Though there's no obvious moral, there's plenty to think about in terms of celebrity, journalism, writing, friendship, and loyalty. The film also touches briefly on issues of addiction and suicide.