The End of the Wicked Tiger 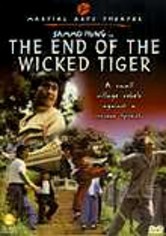 The End of the Wicked Tiger

1984 NR 1h 25m DVD
Hong Kong action superstar Sammo Hung helped choreograph and co-stars in this High Noon-like tale of courage and corruption. In the early 20th century, a crime lord (Han Ying Chieh) has a small town under his thumb until a new police captain arrives to put things in order. Only one brave witness, Ma San (Charles Heung), is willing to help fight against the impossible odds. An array of spectacular fight scenes dominate.