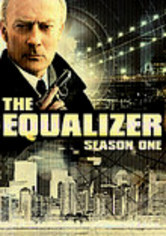 1985 NR 5 discs
"Got a problem? Odds against you? Call the Equalizer!" So reads a Yellow Pages ad placed by Robert McCall (Edward Woodward), an aging ex-secret agent who atones for his past sins by helping New Yorkers in need in the debut season of this fantastic CBS action drama. The impeccable Woodward is joined by such guest stars as Jerry Stiller, David Alan Grier, Luis Guzman, Meat Loaf, Melissa Joan Hart, Tony Shalhoub and many more.