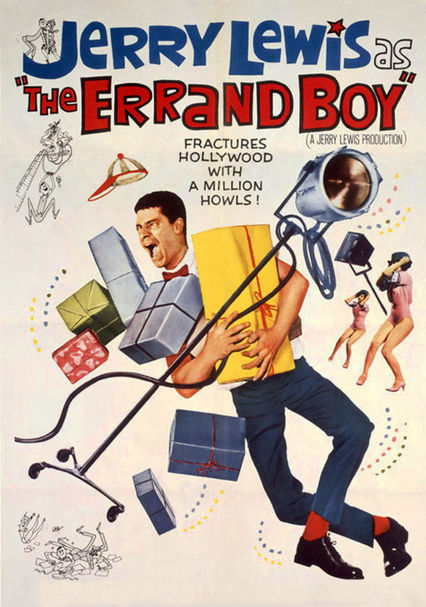 1961 NR 1h 32m DVD
Hired to spy on the employees of a major movie studio, well-intentioned but disaster-prone Morty Tashman wreaks havoc on Hollywood as he wanders into a string of mishaps at the Paramutual Pictures lot, looking for infractions to add to his report.

Parents need to know that The Errand Boy is a classic 1960s Jerry Lewis comedy that pokes fun at the movie industry. There's some movie-set violence, including war and cowboy scenes with fake guns going off, a behind-the-scenes look at how to fake a man hitting a woman, and lots of bumbling slapstick accidents. There's also some mild innuendo, including an on-screen kiss and a song about lovers. Casual drinking and smoking is plentiful, typical of movies from the era. Tongue-in-cheek and sarcastic jokes about the movie industry also are central to the plot and most likely will be over young kids' heads.

Lots of slapstick accidents, some movie-set war scenes with guns, one fake scene of an actor slapping a woman in the face.

No positive messages here. If you act idiotic, you'll be rewarded with fame and movie roles.