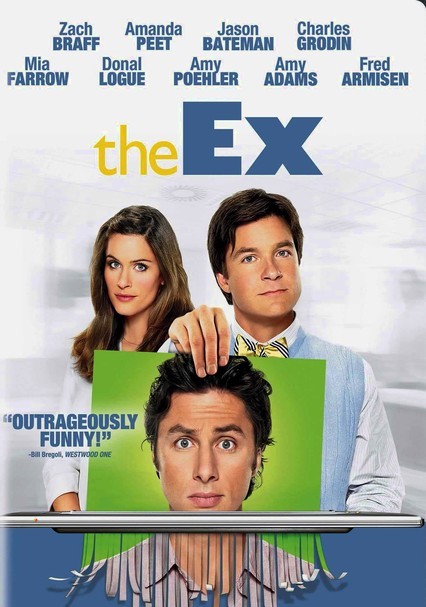 2006 UR 1h 24m DVD
Tom Reilly is an underachiever. But when his pregnant wife, Sofia (Amanda Peet), decides to quit her demanding career as a well-paid, high-profile attorney and become a stay-at-home mom, he's forced to step up to the plate and become the family breadwinner. Reilly takes up a job at his father-in-law's (Charles Grodin) ad agency, where he must report to Sophia's irritating ex-boyfriend (Jason Bateman), who still carries a torch for her.

Parents need to know that this is a crass comedy aimed at 13-year-olds who like jokes at others' expense. A character in a wheelchair is ridiculed, a cartoon character is a racial stereotype, and there's lots of innuendo about a character's large genitals. There's a generous helping of "f--k"s and "s--t"s, along with scenes in which a husband and wife negotiate when and how to be intimate beyond basic canoodling, two men talk about what makes a wife willing to have sex with her husband, co-workers gossip how a physically disabled man pleases a woman, and more. Plus, an elementary-school-age kid gives Tom the finger and swears, and the two main male characters do lots of fighting and trash talking.

Tom and Sofia come on to each other, with varying degrees of success. Kissing, groping, and much innuendo about one character's generously sized genitals. Some graphic description of sex acts and unusual positions. Allusions to past conquests and tips from a married man on how to get more action. Pornographic material shows up on a laptop. A man sits naked in a chair with a towel across his lap.

Fairly brutal fistfights between Tom and Chip, plus a basketball game among men in wheelchairs that's pretty intense. One character pushes another down a flight of stairs.

Tom is a maverick who says it like it is, even when he's shoving his foot down his mouth and offending others. He also taunts and stalks a kid (who gives him the finger) and lies about an incident at work. Chip is a sociopath bent on destroying Tom at any cost, even if it requires lies, deceit, and outright violence.

Tom works at an ad agency, so some products are labeled (though for the most part, they're made up).

Some drinking during toasts and similar events -- and, once, after a character loses his job, he drinks scotch during the day.