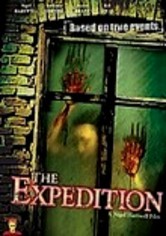 2006 R 1h 47m DVD
On Halloween night 2004, five documentary filmmakers ventured into a famed haunted house, but one of them never made it out alive. New Blood Entertainment later used their footage and reenacted key scenes to show what actually happened. The authorities eventually cleared the survivors of suspicion, but the terrible truth of that evening is far more terrifying than any human crime. Anthony Cortese, Jessica Brant and Bill Lucas co-star.