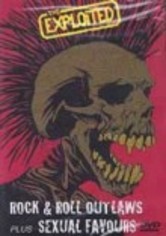 2001 NR 1h 45m DVD
Rounding up behind-the-scenes footage, archival concert film and an extended interview with the Exploited's front man, Wattie Buchan, this comprehensive documentary captures the chaos and controversy created by the British punk rockers. Also included is the explosive band's notorious "Top of the Pops" gig, along with performances of "Punk's Not Dead," "I Believe in Anarchy," "Army Life" and more.