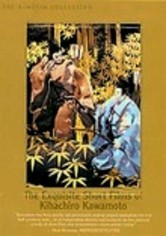 1968 NR 1h 39m DVD
This collection of short films from stop-motion animator Kihachiro Kawamoto traces the arc of his illustrious career and the evolution of his craft. Selections include "An Anthropo-Cynical Farce" (1970), in which a ringmaster forces dogs to chase their tails; "The Demon" (1972), in which two hunters try to escape from an otherworldly being; and "House of Flame" (1979), in which a woman vacillates between two suitors.