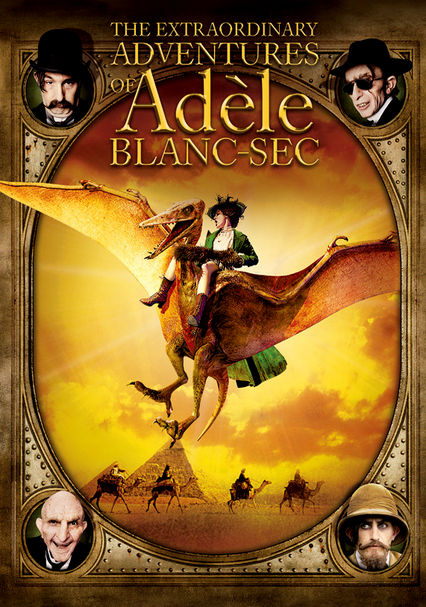 2010 PG 1h 47m DVD
On a mission in Egypt, adventurer Adèle must retrieve a sarcophagus and tote it back to Europe, while fending off her nemesis, archaeologist Dieuleveult. But her efforts are complicated by a scientist who has let loose a Pterodactyl above Paris.

Parents need to know that The Extraordinary Adventures of Adele Blanc-Sec is based on a popular French comic-book series about a pre-WWI journalist who investigates mystical occurrences. Director Luc Besson adapted the stories into a French film in 2010, and it has since been dubbed in English. The content is pretty sophisticated for younger audiences; there is some violence (deaths and near deaths) and a sexually charged scene between a corrupt politician and his scantily dressed mistress. Characters, including the heroine protagonist, smoke cigarettes and drink wine or champagne.

A politician touches his mistress' thigh, and she moans with pleasure. They kiss and giggle. Adele is shown in the bathtub (but only her bare shoulders; her long hair covers her back).

Adele gets into dangerous situations and is nearly killed several different times. A villain orders her shot by firing squad (but she escapes); a man is shown impaled; a scary dinosaur terror bird flies toward a car and topples it. A man is strangled to death, and another man turns to ash for disturbing a sacred tomb. Characters get into fights and try to catch Adele.

The movie's messages include the power of sisterly bonds, the dangers of political corruption, and the ingenuity of intelligent, curious helpers.