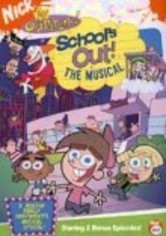 2005 NR 1h 23m DVD
Chronicling the wacky exploits of lonesome 10-year-old Timmy Turner (voiced by Tara Strong) -- whose fairy godparents are disguised as goldfish -- Nickelodeon's droll animated comedy series appeals to kids as well as grown-ups. In this special musical installment, rock 'n' roll bedlam breaks loose when Timmy gets dispatched to a summer-school camp. Among the extras are four featurettes and a pair of bonus episodes.