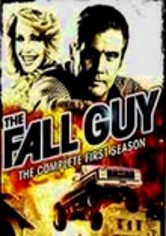 Parents need to know that the 1980's action classic The Fall Guy is mild by today's standards, but contains enough gunfire, physical fighting, and dangerous stunts to make it an iffy choice for younger tweens. Women are sometimes shown in skimpy attire, and there's some drinking. Viewers of all ages should be reminded that no matter how funny or easy the stunts seem, they should never try them at home.

Seavers sometimes flirts to get his way, but there's nothing very sexual in the show. Women sometimes wear bikinis or nightgowns. Occasionally Seavers' denim-clad backside is highlighted in fictitious advertisements.

The focus is on catching criminals, and people are shown getting pushed and punched in the process, with occasional gun use. Lots of dangerous stunts, including crashes, explosions, and leaps from cliffs and windows.

The words "damn" and "hell" are occasionally audible.

There's not a lot of food for thought here; good guys chase bad guys, and usually the bad guys lose.

Cole Seavers drives a GMC pickup truck. High-end cars like Mercedes-Benz and Rolls-Royce are prominently shown or discussed. Random logos for items like Nikon are sometimes visible, too.

Occasionally wine, beer, and hard alcohol is visible at clubs or at social events.