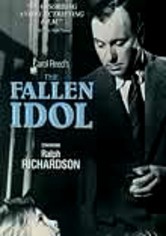 1948 NR 1h 35m DVD
Philippe (Bobby Henrey), a diplomat's son, worships the household butler, Baines (Ralph Richardson), who's regaled the boy with tales of his life's adventures. So, when his hero becomes implicated in a murder, Philippe will stop at nothing to protect his idol. This despite his own suspicions about the servant's guilt. Adapted from a story by Graham Greene, director Carol Reed's reflection on moral ambiguity earned him an Oscar nod for Best Director.