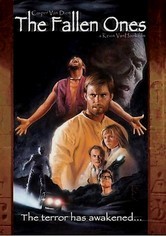 2005 NR 1h 29m DVD
Filmmaker Kevin VanHook's feature is long on adventure and short on boredom, featuring the high jinks of Matt Fletcher (Casper Van Dien), an archaeologist who chances upon a mysterious tomb on one of his digs. But it's not just any old find: It's the crypt of a gigantic mummy that dates back to the biblical ages. Fletcher's discovery lures a fallen angel to show up as well, throwing everyone into panic. Robert Wagner co-stars.