The Familiar of Zero 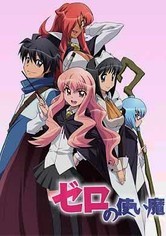 The Familiar of Zero

2006 NR 3 discs
Louise's reputation at the Tristain Academy is so bad that her nickname is "Zero" -- as in, she's had zero success when it comes to casting spells. That's why no one's more surprised than she is when her attempt to produce a familiar actually works! Still, there must be a catch, because Louise's familiar was supposed to be "devoted, beautiful and powerful" … but Hiraga Saito seems to be just an ordinary boy.