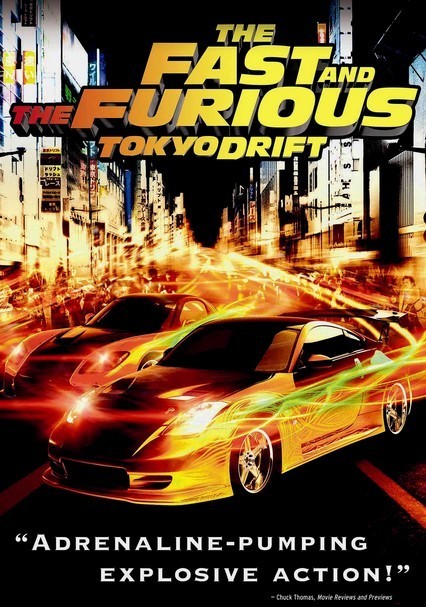 2006 PG-13 1h 45m Blu-ray / DVD
The hit franchise's third installment finds street-racer Shaun Boswell moving to Tokyo, where he's been dispatched by his family who want to keep him out of lockup. Boswell soon hooks up with a fellow American who introduces him to drift racing.

Parents need to know that movie includes frequent car racing and crashing, including a car that flips over and explodes, killing the driver (with a disclaimer advising viewers not to try such tricks at home). High school-aged boys fight (a beatdown in the schoolyard), a Yakuza gangster threatens violence; gangsters show guns (inspiring the kids at risk to jump in their cars and drive fast again). High school-aged girls show much skin and dance provocatively in brief party scenes. High school kids smoke cigarettes and drink liquor; the adult villain smokes a cigar. Some language (s-word and suggestive soundtrack lyrics).

Cars crash repeatedly, sometimes flipping over horribly, and in one instance, exploding and killing the driver; boys beat each other up, leading to bruised faces, crumpled bodies, bloody mouths.

Tough guys talk hard: several uses of s-word, occasional "damnit," Bow Wow boasts he's such a good salesman he "could sell a rubber to a monk."

Villains smoke cigarettes repeatedly (and a cigar); background smoking in clubs and at races; high school students drink in clubs and parties.