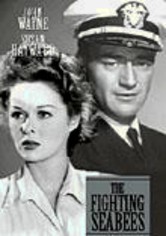 1944 NR 1h 40m DVD
In response to a string of Japanese attacks, Wedge Donovan (John Wayne) -- the owner of an American construction company working in the Pacific during World War II -- convinces the United States military to let his men bear arms. As Donovan molds his civilian crew into Construction Battalions, or CBs ("seabees"), a love triangle emerges with a fetching journalist (Susan Hayward) and a dashing officer (Dennis O'Keefe).