The Fire That Burns 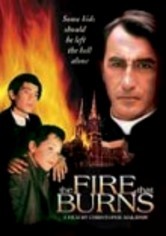 The Fire That Burns

1997 UR 1h 28m DVD
Philosophy student Andre Sevrais attends a Catholic boys' school in pre-World War II Paris, where he becomes fast friends with a younger schoolmate named Souplier. But this close friendship does not go unobserved by the Abbot de Pradts. He harbors a secret obsession with Souplier and plots against Sevrais. Ultimately, however, the Abbot is undone by his own hand. This film is adapted from the novel by Henry de Montherlant.