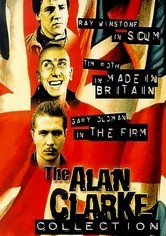 2004 NR 1h 49m DVD
Two cinema shorts explore noted British television and film producer Alan Clarke's equally pioneering efforts as a director. In "The Firm," Gary Oldman stars as the leader of a gang of football hooligans. He concocts a plan to unite rival teams -- or "firms" -- but his efforts result in violence. "Elephant," which inspired Gus Van Sant's 2003 film of the same name, follows a series of random killings in Northern Ireland.