The First Kings of Comedy Collection 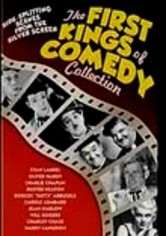 The First Kings of Comedy Collection

2007 NR 2h 40m DVD
Demonstrating the enduring hilarity of the cinematic slapstick that came out of Hollywood's silent era, this pair of documentaries from Robert Youngson serves as a joyful tribute to the form's most sublimely silly masters. In The Golden Age of Comedy Jean Harlow, Ben Turpin, Laurel and Hardy and others yuk it up, while in When Comedy Was King, the talents of Charlie Chapin, Fatty Arbuckle, Buster Keaton and Gloria Swanson are on full display.