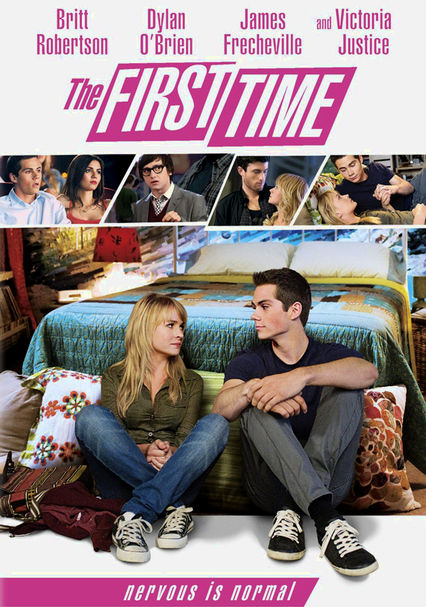 2012 PG-13 1h 38m DVD
Dave is in love with the hottest girl in school, Jane (Victoria Justice). Unfortunately, she only thinks of him as a friend. But a chance encounter with Aubrey leads to a hilariously awkward romance in this comedy that features a hot ensemble cast.

Parents need to know that romantic comedy The First Time offers a frank look at teenage sex and how teens decide to become sexually active -- as well as the importance of having a meaningful relationship with honest communication. Expect open conversations about sex, virginity, and condom use; some heavy making out; an implied post-sex scene of teens in bed together; and topless teen girls covering their breasts with their hands while running out of a party (where underage drinking is taking place). There's also some swearing (one "f--k," plus "bitch" and "s--t") and a car crash.

In one scene, teen girls run out of a party topless, covering their breasts with their hands. And lots of talk about sex. A teenage couple discusses having sex for the first time in detail; they make out heavily and proceed to try to have sex, and they bring up the need for condoms. Teens are shown under the covers, presumably post-coital.

A teen jumps off a roof and, miraculously, is unhurt. A car crash is shown, with bloody aftermath.

Finding a meaningful relationship while you're a teenager can be very difficult in a world where your peers are all cloaking their real selves so they don't get hurt. But it's worth it, because a true relationship demands the willingness to be vulnerable. Also, the movie posits that sex isn't a subject that should go unspoken in a relationship -- it says that clear and honest communication is essential.

Teens are shown rushing out of a house party where underage drinking is taking place, though not much drinking is shown on-screen.