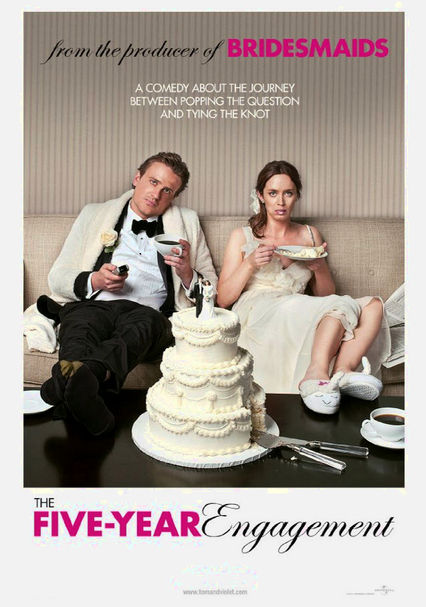 2012 R 2h 4m Blu-ray / DVD
Jason Segel and Emily Blunt star in this contemporary romantic comedy as an engaged young couple who discovers that the more they get to know each other, the more unpredictable their commitment to getting married becomes.

Parents need to know that The Five-Year Engagement is a Judd Apatow-produced romantic comedy that stars Jason Segel and Emily Blunt as a couple who finds that, the longer their engagement lasts, the more potential problems they discover, and the harder it becomes for them to follow through on matrimony. There's tons of innuendo and adult sexual references, an extended sex scene with multiple positions (though no graphic nudity), a few scenes showing men naked from behind, and plenty of risque language (including "f--k," "s--t," and more). Overall, though, the tone is more "heartwarming romcom" (with a dash of bawdiness) than outright "raunchy comedy," and the film has worthwhile things to say about grown-up relationships.

Some heated arguments and a few accidents involving a crossbow, a cleaver, and frostbite that feature grisly images of reasonably serious injuries (though the tone is light/humorous). Some scenes feature deer hunting. One man angrily threatens another with bodily harm, chases him down the street, and then takes a few swings at him, though it's not really much of a fight.

The movie's central message is that relationships aren't perfect, and nobody will be everything to their partner at all times. This dose of realism contradicts the dewy-eyed love that blinds many young couples on the path to matrimony, but it's important for adults to realize as their relationships evolve and mature.

Several people use Apple computers, and the University of Michigan plays an key role in the film. Zingerman's, a well-known deli in the school's hometown, has a big role in the film and is mentioned by name, repeatedly, and praised in glowing terms.

Several scenes show people drinking at parties, at bars, and at other social events. A woman sometimes steels herself with a drink before difficult conversations. Some people get quite drunk on occasion and are later shown with hangovers or suffering from other problems related to overindulging.