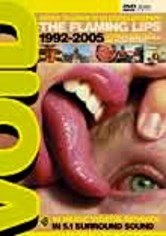 2005 NR 1h 15m DVD
Psychedelic rockers the Flaming Lips showcase their best work in this video retrospective. The collection features 19 videos from the late 1990s, plus a few from the early '90s. Also includes commentary on some videos, "SpongeBob and Patrick Confront the Psychic Wall of Energy," the U.S. and U.K. versions of "Do You Realize??" and the video for "Mr. Ambulance Driver," which is featured in the film Wedding Crashers.