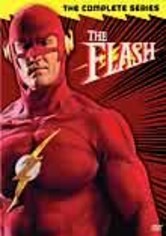 1990 NR 6 discs
In a one-in-a-million occurrence, police scientist Barry Allen (John Wesley Shipp) gets hit by lightning and then drenched with a potent combination of chemicals that transform him into the Flash -- the fastest man on Earth. After the newly minted superhero learns how to use his powers, he sets out to rid Central City of crime. Fans say this sci-fi series is one of the best live-action comic book adaptations ever made for television.