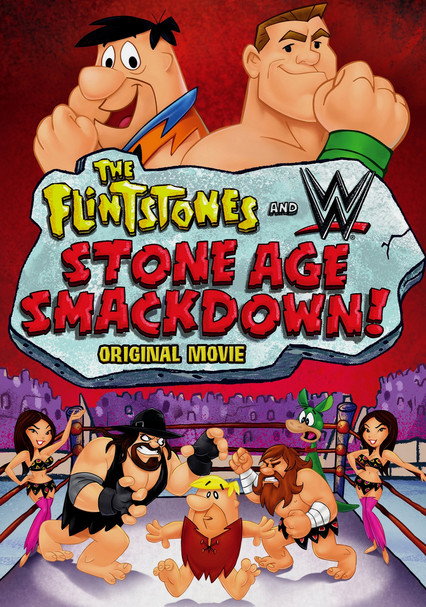 2015 NR 0h 50m DVD
Get ready for some raw-kin' action in this all-new, original movie that brings some of WWE's toughest, wildest superstars to Bedrock! When Fred loses his family's vacation money, he hatches one of his hair brained plans to get it back. It's a sports entertainment spectacle that involves throwing his best bud, Barney into the wrestling ring with the likes of John Cenastone, Rey Mysteriopal, and even The Undertaker, with Fred himself as event promoter!

Parents need to know that Flintstones & WWE: Stone Age Smackdown is modern revamp of The Flintstones that heavily features the WWE franchise. Actual WWE wrestlers given a Flintstones twist are featured alongside the original Flintstones crew, and the plot centers on WWE-style wrestling matches. The short film features some mild name-calling, a few skimpy outfits, and a lot of cartoon violence in and out of the wrestling ring.

Lots of cartoonish violence, such as wrestling matches that lead to black eyes and slapstick bumbles and falls.

Mild name-calling such as "ugly," "chicken," and "loser."

Some attempt at showing that risking your family's livelihood to make more money isn't worth it, but the characters don't learn from their mistakes and are back to the same schemes by the end.

The entire movie is a product tie-in for the WWE franchise. Also references to many other brands with a Flintstone twist (Stonebucks, Marshales, and so on).

Fruity umbrella drinks at a resort that could be alcoholic.