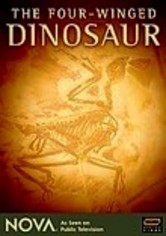 2008 NR 0h 54m DVD
Join the "Nova" team as they accompany a world-class crew of paleontologists and aeronautical engineers on a journey to eastern China to examine a four-winged, feathered dinosaur's fossilized remains and attempt to create a robotic replica. Beautifully preserved in volcanic ash, the pigeon-sized Microraptor may hold clues to the origin of flight, a theory the scientists test on their high-tech model with a climactic wind-tunnel experiment.