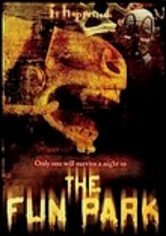 2007 R 1h 28m DVD
More than two decades after someone brutally murdered Bobo the Clown at Family Fun Park, six teens set out to disprove an urban myth -- that his ghost haunts the park's deserted grounds -- but their adventure turns into a horrific nightmare. For Megan (Jillian Murray), her beau (Randy Wayne) and their four friends, it's anything but funny when they encounter a psychotic fiend who dwells in the park's dark recesses in this direct-to-video chiller.