The Game: Life After the Math 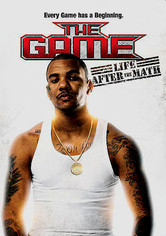 The Game: Life After the Math

2007 NR 1h 21m DVD
Get the story behind the Game from the superstar rapper himself. The Game (aka Jayceon Taylor) talks about growing up in Compton, Calif., his rise to fame, his departure from Dr. Dre's Aftermath Entertainment and his signing with Geffen Records. Studio footage of the Game with chart-topping rap artists Busta Rhymes, Nas and others offers hip-hop fans a special bonus.