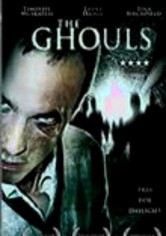 2003 NR 1h 21m DVD
A video journalist who makes a living filming deadly carnage must fight for his life when he discovers zombies living beneath the streets of L.A. in this chilling horror film. Eric Hayes (Timothy Muskatell) is always searching for the next horrific accident or crime scene so he can sell the graphic footage to tabloid programs. But he gets more than he bargained for when he stumbles upon a group of undead ghouls whose bloodlust exceeds even his.