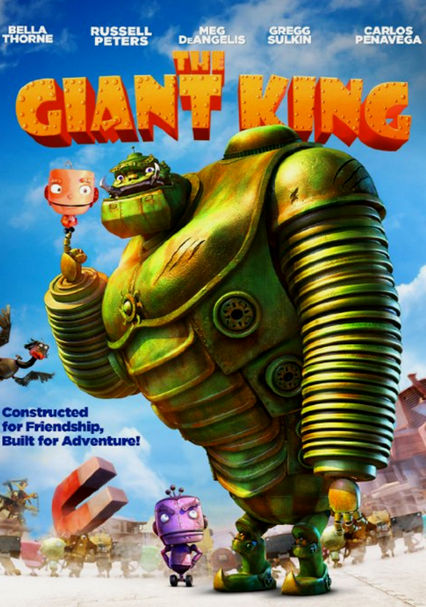 2015 PG 1h 44m DVD
A re-interpretation of Ramayana, this animated film tells the story of a giant robot who's left wandering in a barren wasteland after a great war. Soon chained to a sworn enemy puny robot who's lost his memory they set off across the desert populated by metal scavengers, to look for Ram, the creator of all robots.

Parents need to know that The Giant King is an animated battling robot film with plenty of cartoon action and jeopardy, alongside well-defined characters, lots of humor, and upbeat music. Very clear (and repetitive) messages about friendship and fulfilling one's dreams provide motivation and teach important lessons. Violence occurs in the form of bot attacks: crashing, crushing, firestorms, treacherous falls, lightning, a giant menacing magnet, and even a prolonged battle between a heroic robot and the sun. The predominance of comic "life-and-death" action, as well as some crude humor (a discussion of boogers, buttocks jokes) and insults, make the movie best for older kids. It's definitely not for those who cannot yet differentiate between real and make-believe. This version of Yak: The Giant King, a hit in Thailand, where it was made, arrives with the jokes, characters, and cultural references well translated for English-speaking audiences

Direct, repeated messages about friendship: what it means to be a friend, how friends treat one another. Promotes having dreams for oneself and being willing to fight for those dreams.