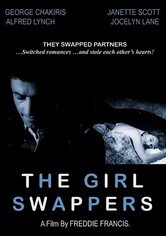 1962 PG 1h 30m DVD
George Chakiris (West Side Story) stars in this comedy as AWOL Air Force Col. Larry Curado. Believing he killed a sergeant during his escape, Larry grabs his girlfriend and flees on his brother's motorcycle. On the road, they meet a fellow rider and his girl on an identical bike. After a stop at a café, the women confuse the bikes and end up with the wrong men. Janette Scott and Jackie Lane co-star in this mistaken-identity farce.