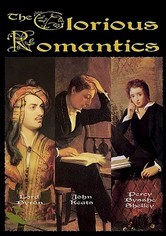 1995 NR 1h 30m DVD
Richard M. Russell directs award-winning actress Jean Marsh and a poetic panel of actors portraying three of the 19th century's most acclaimed literary figures. Lord Byron, John Keats and Percy Shelley read selections of their works, augmented by dramatizations of the events and thoughts that influenced their writing. Readings include Keats's "Ode to a Nightingale," Byron's "Nay Smile Not at My Sullen Brow" and Shelley's "Love's Philosophy."