The Godfathers of Mondo 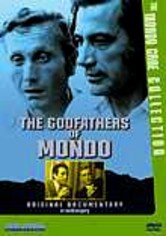 The Godfathers of Mondo

2003 NR 1h 30m DVD
Filmmakers Gualtiero Jacopetti and Franco Prosperi are huge historical influences on everything from hardcore horror films to broadcast news and reality TV. This video focuses on the filmmakers themselves and how they concocted their "mondo" idea, which led to a series of "shockumentary"-style films known for their sensational treatment of documentary footage -- a style that became a fixture of transgressive film art.