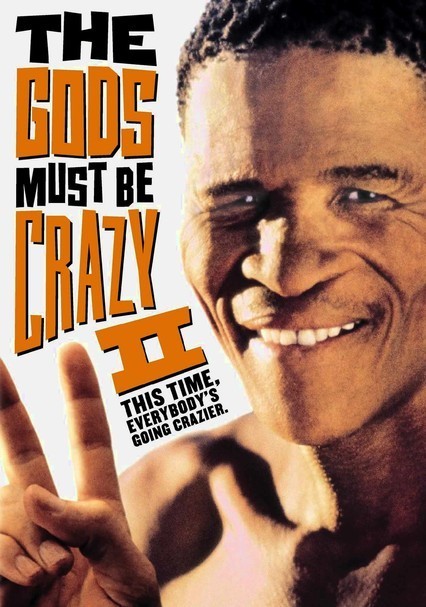 1989 PG 1h 38m DVD
N!xau is back in this sequel to the 1980 cult hit, and this time, an even stranger turn of events -- stranger than a Coke bottle -- leads him to an unexpected run-in with the world beyond his African village. While hunting in the desert, N!xau discovers that his children have been abducted by elephant poachers and vows to find them. But he's forced to save the day (again) when he meets transplanted New Yorkers and soldiers who've lost their way.

Parents need to know that this sequel to The Gods Must Be Crazy follows the same formula and is just as charming. This fish-out-of-water tale focuses on a big-city lawyer who ends up stranded deep in the African bush, who realizes that her book-learning is almost useless and the truly educated people are those who learn to read the language of the jungle. There's mild swearing ("hell" and "ass") and some gunfights that have a slapstick tone, but overall this is a fun film that families will enjoy watching together.

Some bumbling flirting and one scene where a woman accidentally exposes her underwear. The African bushmen, who live in a remote and hot part of the continent, wear very little clothing.

Several scenes feature soldiers and poachers wielding weapons and shooting at people, though the gunfights border on slapstick and nobody really gets hurt. One scene shows a dying elephant after poachers have removed its tusks.

While those who live in the modern world might think themselves better or more evolved, they don't know as much as they might think, and their lifestyle is not necessarily better. There is a strong anti-consumerism message.