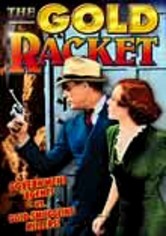 1937 NR 1h 6m DVD
After two operatives are murdered, special agents and lovers Alan O'Connor (Conrad Nagel) and Bobbie Reynolds (Eleanor Hunt) head to Mexico to break up a gold smuggling ring in this noir crime mystery. Stunning Bobbie puts herself in danger's path by going undercover as a nightclub singer as part of the investigation, but when villains kidnap her, it's up to heroic Alan to rescue his lady and bring in the bad guys. Fuzzy Knight co-stars.