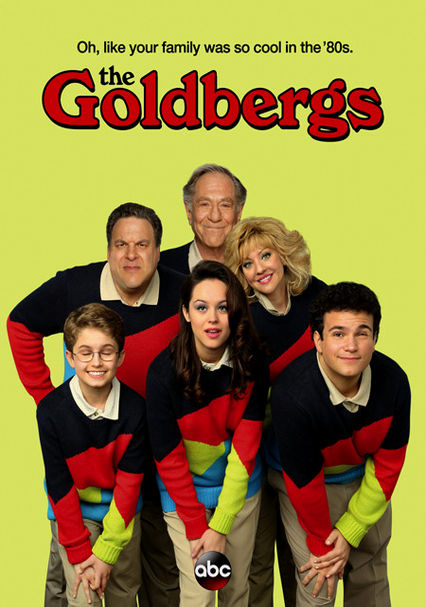 2013 NR 2 seasons
Meet the Goldbergs: Murray, Beverly and teenage Barry and Erica. Then there's 11-year-old Adam, who's capturing their every moment on video. This quirky series, built from Adam's tapes, re-creates family life in the pre-YouTube 1980s.

It's the 1980s, and 11-year-old Adam Goldberg goes nowhere without his camcorder, documenting his family's every outrageous moment. His tapes capture Mom's overbearing parenting style, Dad's short temper and his own crush on an older woman.

The Goldbergs continue to lead their often off-kilter lives in 1980s suburban Philadelphia, facing new family challenges that include Adam's failure to land the lead role in his school's musical and Barry getting nabbed with a fake ID.

Parents need to know that The Goldbergs centers on a quirky family with three kids, ranging in age from 11 to 17, coming of age in the 1980s. They like to yell. A lot. You'll mostly hear gateway terms like "hell" and "damn," although there's some occasional bleeped swearing for stronger words such as "motherf--ker." There's also some mild sexual innuendo related to teen dating and raging hormones, and some dialogue suggests teen characters drink alcohol. Any violence is played for comedy, and most brand names are mentioned for the sake of nostalgia.

Light to moderate innuendo with some story lines that touch on relationships and dating. Characters might use language such as "cop a feel" or "boobs."

Any type of violence -- whether it's a fall or a car crash -- is played for comedy.

Language includes gateway terms such as "hell," "crap," and "damn," with more creative slurs such as "assbag," and, on occasion, some bleeped swearing ("motherf--ker"). There's sexual language such as "boobs," plus some insults from parent to child: "moron," "idiot."

Episodes typically end with a strong takeaway: for example, our parents love us, even if we don't always feel like they understand us.

Some brand names are featured -- from Hooters to MTV -- but it's mostly for the sake of nostalgia.

Dialogue hints at teen drinking, but it isn't shown on-screen.