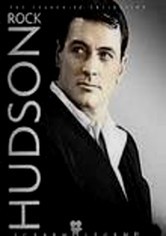 1953 NR 3h 13m DVD
Rock Hudson's all-American good looks stand up equally well on foreign shores as the star travels to Arabia for The Golden Blade and then heads south of the border to Mexico in The Last Sunset. In the former film, Piper Laurie co-stars as a princess who presents Harun (Hudson), a man intent on avenging the death of his father, with a magic sword. In the latter, lawman Hudson pursues outlaw Kirk Douglas on a cattle drive to Texas.