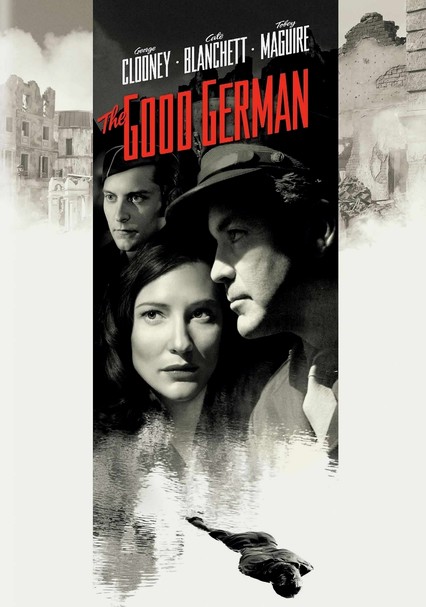 2006 R 1h 48m DVD
U.S. Army correspondent Jake Geismar rekindles relations with an old flame, Lena, in this Steven Soderbergh drama set in post-World War II Berlin. When her husband is hunted by U.S. and Russian military, a desperate Lena looks to Jake for a way out.

Parents need to know that this black-and-white, 1940s-style "film noir" isn't likely to appeal to kids. Its plot includes references to Nazis, war crimes, and the atomic bomb, as well as lots of strong language and violence (beyond what typified the era). Characters frequently say "f--k"; there's also one use of "c--t" and an anti-Semitic remark. Violence includes beating, kicking, and shooting (resulting in bloody wounds). Sexual imagery includes a woman stripping, a rough sexual act (the woman's figure and face are in shadow), and some kissing. Several references are made to Lena's work as a prostitute. Characters smoke incessantly (it's 1945) and drink like fish.

An explicit sexual act (woman in shadows on bed, man has sex from behind her); Hannelore performs feather/strip dance in club (shadowy); Hannelore strips to her underwear and invites Jake to have sex with her (using explicit language); Hannelore and Lena work as prostitutes (discussed frequently).

Smoking cigarettes and/or drinking in nearly every scene, as befits a "noir" update.