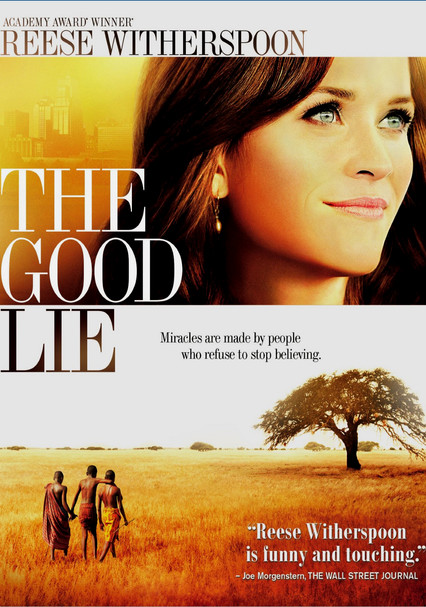 2014 PG-13 1h 50m Blu-ray / DVD
In this fact-based drama, a young Sudanese War refugee wins a lottery that allows him to start life anew in the United States. But adapting to his new home presents challenges -- both for the "lost boy" and for the American woman who's helping him.

Parents need to know that The Good Lie is a feel-good drama that centers on the Lost Boys of Sudan, young adults who as children in Africa survived unthinkable circumstances (terrible violence, 1,000-mile treks to refugee camps, and more) and in some cases were lucky enough to win lottery visas to the United States. Expect scenes of heartbreaking tragedy early in the movie: kids who die of starvation and exposure; soldiers who burn a village and kill everyone in it, orphaning the main characters; an older brother who sacrifices himself to save younger siblings and friends. The movie (which stars Reese Witherspoon and shares an executive producer with The Blind Side) also doesn't shy away from showing just how lonely, difficult, and sad it can be to move somewhere new where you're safe but don't understand the culture. There's also some swearing, drinking, drug use (marijuana), and a scene of implied sex (nothing graphic shown). All of that said, despite the upsetting moments, The Good Lie is also hopeful and educational and will encourage audiences to do their part to help war refugees.

One scene where it's clear that Carrie has just had sex with a guy she's not really dating but considers a "sex buddy" (nothing sensitive shown).

Very harrowing scenes when the Southern Sudanese kids witness their village being burned and families killed; later, a few of the kids die/are killed on the long, arduous journey to the border refugee camp (starvation, exposure, etc.). Soldiers execute innocent villagers, including children.

Themes includes overcoming unbelievable odds, protecting those you love, creating familial bonds with those around you, and the importance of believing in something. Encourages those of us who are safe and surrounded by family to have compassion toward refugees and immigrants fleeing horrifying circumstances.

One of the Sudanese men is introduced to marijuana by his co-workers. He's shown smoking or high a few times. Carrie drinks on a few occasions and is shown drinking tequila with a friend.