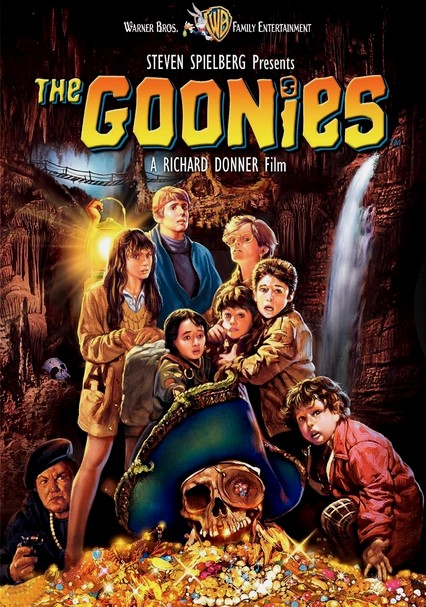 1985 PG 1h 54m Blu-ray / DVD
A group of misfit children discovers a pirate-treasure map and embarks on a journey to find the riches in this beloved 1980s classic. Along the way, they battle curmudgeonly crooks and squabble with one another in their quest for fortune.

Parents need to know that The Goonies is a rambunctious, noisy, pirate-themed treasure-hunt action-fantasy -- all the ingredients that kids will love. Kids are in peril, find a dead body, are being hunted by thieves who are after their treasure map, and fall into all kinds of trouble. Beyond the (now-dated) special effects, cavernous (literally) sets, stunts, hideous skeletons, and outsized props, there's a message about being yourself and bonding with your friends and siblings -- even if they're outcasts. Some stereotyping -- the fat kid, the jock older brother, the Asian who's a gadget fanatic, etc. A physically disabled grown man is considered a "monster" by his family and is chained up under the stairs. Expect some vulgar humor and swearing (including "s--t"). The movie may be too scary for some kids, so know your kid before you watch.

Death and torture are constantly threatened and implied. Even though all that really happens is lots of falling down and getting wet, there are plenty of crushed/impaled skeletons along the way for maximum gruesomeness. Young kids also discover a frozen dead body.

Although there's some stereotyping and conflict/other iffy behavior among characters, overall the movie promotes positive messages about teamwork, believing in yourself, and the triumph of the underdog.