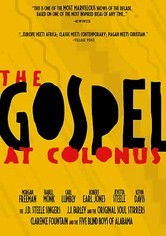 1985 NR 1h 30m DVD
Experimental theater director Lee Breuer and composer Bob Telson transform Sophocles's Oedipus at Colonus into a one-of-a-kind gospel extravaganza in this celebrated 1985 performance filmed live in Philadelphia. Originally televised as part of the PBS "Great Performances" series, the production stars a commanding Morgan Freeman as the Messenger and the Blind Boys of Alabama, who collectively play the role of Oedipus.