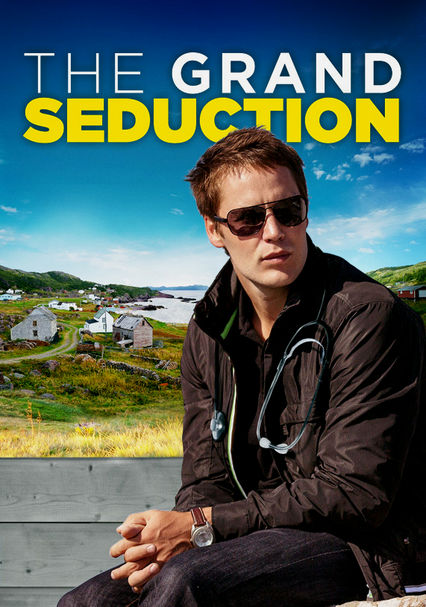 2013 NR 1h 55m DVD
The cash-strapped burg of Tickle Cove must persuade a doctor to move to town if they want a plastics manufacturer to build a new factory there. But selling the advantages of the tiny Newfoundland village to a young professional won't be easy.

Parents need to know that The Grand Seduction is a dramedy about small-town folks who tell huge lies for a specific reason but eventually learn the value of the truth. It's a remake of a 2003 French-Canadian film, though it's more reminiscent of The Full Monty. The word "seduction" in the title doesn't refer to sex, though the movie has a fair bit of suggestive material -- particularly the sounds of couples having sex off screen. There are also brief references to Internet porn and "the pill." Characters drink alcohol frequently, and main characters get staggering drunk. A character is caught with cocaine and is jokingly referred to as a problem cocaine user, though he doesn't use the drug onscreen. Characters argue frequently, though language is fairly mild, including uses of "goddamn," British slang like "arse," and one or two uses of "Jesus" (as an exclamation). Aside from the casting of Taylor Kitsch, this movie seems aimed at older viewers; teens likely won't be very interested.

At night, couples all over town are heard having sex; viewers only see the outsides of houses with lights burning in bedroom windows but hear groaning and moaning and then satisfied sighs. While surfing the Web, a man asks to see photos of "naughty nurses." The computer screen isn't shown, but the men are shown smiling as they look at it. A woman with a bunch of kids tells the doctor that she needs to "go on the pill." A couple has phone sex, but nothing graphic is heard beyond some noises.

Language includes words such as "goddamn" and "moron," British slang like "bloody" and "arse," and a use or two of "Jesus" (as an exclamation).

Characters are shown working together, and the power of the truth is a key theme of the movie. A superficial character learns the value of community and the value of helping others and learns to give up his previous goals of being rich and living a life of pleasure and ease. Characters learn the value of hard work, rather than collecting welfare checks.

One of the main characters is caught with cocaine, though it's suggested that he was using it to "celebrate" and doesn't partake regularly. He isn't seen actually using cocaine at any point. Characters spend great portions of the movie drinking in the local tavern, and many characters are shown to be staggering drunk in at least one scene, including the main characters. Problem drinking and/or alcoholism is never mentioned or suggested. A woman smokes a cigarette.