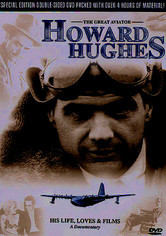 2004 NR 4h 43m DVD
As a filmmaker, Howard Hughes penetrated Hollywood's elite inner circle (bedding dozens of starlets along the way). But as an aviation pioneer, Hughes really shone: he broke numerous flight records -- and landed multimillion dollar government contracts -- on the way to becoming a national hero. Get a glimpse of the life of one of America's most fascinating entrepreneurs. Also includes the feature films The Outlaw and The Sin of Harold Diddlebock.