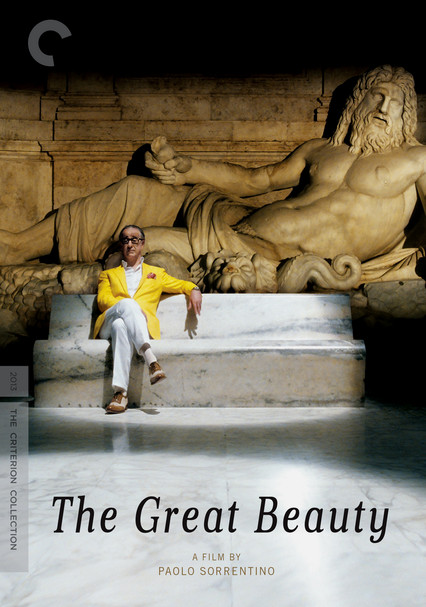 2013 NR 2h 22m Blu-ray / DVD
As charming 65-year-old journalist Jep Gambardella writes about Rome's culture and social life, he reflects with bitterness on the passions of his lost youth, even as he paints a complex portrait of the lovely and ancient city..

Parents need to know that the Oscar-winning The Great Beauty (in Italian with English subtitles) is an exceptional film for mature audiences, set among the wealthiest citizens of Rome. In a movie in which every image is magic, Paolo Sorrentino captures the wild escapades, the devastating personal tragedies, and the profundities of the "examined life." Nudity (both partial and full frontal -- and lots of it), sexuality, and profanity, along with alcohol and substance abuse, all contribute to the portrait the writer/director paints of one man at the age of 65 and the society in which he lives. Some scenes may disturb even the most sophisticated audiences (a woman purposefully runs head-first into a stone wall; a young girl is forced to create "art" while in a state of utter hysteria; a saintly nun pushes herself to extremes of physical punishment). Language includes "s--t," "f--k," "bastard," "screw," "p---y," and "ass."

Sexuality and sensuality are primary focuses of the film. Nudity (full frontal -- both male and female), partial nudity (breasts, revealing clothing), and sexual behavior (post sexual moments, talk of sex, stripping, sexual language) are woven throughout. No intercourse is shown.

Some disturbing scenes. A woman purposefully runs head-first into a stone wall. A child is forced to create art while in a state of uncontrollable rage. A tourist drops dead. Several off-camera deaths occur, resulting in shock and grief.

Comments on both the humor and pathos in the act of living. Asserts that individuals engage in "performance" as a means of protecting their fragile souls. Finds purpose in the act of re-examining your life and trying to make sense of it.

Drinking and smoking occur throughout the film. Alcohol fuels the behavior at many of the wild parties depicted, with some drunkenness and abandon. The lead character is shown with a cigarette and alcoholic beverages in scene after scene. In one extended sequence, party-goers snort cocaine.